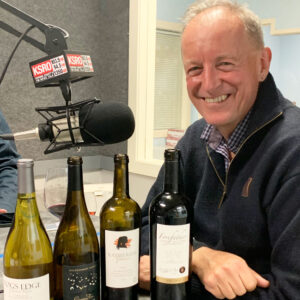 Winemaker Nick Goldschmidt is our in-studio guest today on California Wine Country with Steve Jaxon and Dan Berger. He came from New Zealand and has been making wine in California for 32 years. Nick is the owner of Goldschmidt Vineyards. His studies included civil engineering, organics and biodynamics in New Zealand then a degree in viticulture and a post-graduate degree in enology in Australia. After that he worked in Chile in the late ‘80s and then came to California in 1989. He got a job at Simi Winery in 1990, owned by LVMH.

In 1992 he was appointed their Global Blender, responsible for blends across a wide portfolio of brands produced in several countries. In 1999 Constellation bought them. He left Simi in 2003 to another conglomerate with 58 wineries in 7 countries. He got to collaborate with many great winemakers. Then in 2008 he started his own label. He also owns a company that makes wine for other people, he holds some patents on machinery and he consults to several wineries. He continues to travel extensively in the southern and northern hemispheres.

Nick’s wines as precise scientifically, says Dan Berger, carefully produced and exhibits the character it is supposed to. For someone who makes so much wine in so many places, they are all excellent.

Dan Berger also has brought a cellar wine again. Since Nick mentioned that he likes Chablis, Dan got a 2006 Chablis from his cellar Joseph Druin Premier Cru. Nick says that this reminds him of where he was in 2006, he worked for the Jim Beam company at the time. He remembers the vintage and later he compared making beer and wine, and says that making wine is different every year, as the art of the practical. Nick prefers that to making beer, which he finds “boring” since it’s the same day-to-day, batch after batch.

The Singing Tree 2019 Goldschmidt Russian River Chardonnay that they taste comes from the Dutton vineyard. This is old vine Chardonnay that is planted in Sonoma County Goldridge soil. Dan Berger notices the shallot flavors in the background and a lemon or citrus note up front and a richness in the center. The Dutton vineyard produces less friut per acre but of extremely high quality.

The next tasting is a wine of his production. He tells the story that he was living in Chile under the dictator, who cut off electricity to the winery, so he had to make wine without it. They converted all their processes to non-electric and called it an “unplugged” wine. It’s named and labeled after his daughter Chelsea.

They are located on Dry Creek Road in Healdsburg. They have a little tasting room. Call (707) 431-8277 for information.

Next they taste a 2020 Alexander Valley Cabernet named Katherine after his middle daughter. It comes from a little valley east of Geyserville.

The last Cabernet is the Forefathers label, a wine he started when he still worked for corporations. He thinks of certain places as the best for certain varieties (SV in NZ, Malbec in ARG, etc). He thinks Cabernet is best made on the north coast. Its label has a pair of boots he used to wear in the vineyard. They call it Lone Tree vineyard because there is one lone tree in it. It is very dark in color.