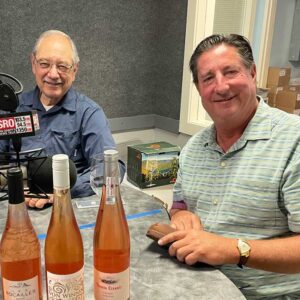 Bottle Barn has more Rosés than anyone in Sonoma County and may stock more than any store in the whole country. They have at least 90 different ones, which is not quite as much as last year. They come from many regions of the world. They open one that comes from Basque country in Spain. Another feature is that there is a spectrum of colors of all of these wines.

Dan Berger tells how it took an entire generation of people disparaging pink wine before a new generation decided to try it before deriding it. When the weather is awfully hot as it is now in late August, there are few wines more pleasant to drink.

Now, Rosé is an “unstoppable train,” says Barry Herbst. The quality is so high and the flexibility with food makes it available to pair with many flavors of food. It is also easier and less expensive to produce than wines that require barrel aging.

The first is called Kara Marie, the Ra Ra Rosé, a local production of winemaker Daryl Groom, named after his daughter. It is made from Grenache grapes grown in Dry Creek Valley. It has strong floral flavors and a trace of the taste of the red wine that it comes from. It is “perfectly dry” says Steve Jaxon. Dan suggests it would go with Steak Tartare.

All of the wines today are from 2021. Some of these wines improve after a year or two and they are made to be enjoyed young. But if you accidentally lose a bottle in your cellar, don’t toss it before you try it! Don’t buy anything three years old, as that can be too late.

Next is Husch Vineyards 2021 Mendocino Blaze Rosé. It is the pale pink or copper shade that is second in line in the featured illustration above. This is made from Zinfandel, Carignane and Petit Syrah.

There was a stigma about White Zinfandel at one time, but some producers are actually bringing it back right now. Also, they harvest grapes for Rosé early, even right now in late August.

Next is a 2020 dry Rosé from Von Winning. It should be well chilled and served in a decanter. It is made from Pinot Noir and is very flavorful. There are a lot of nice German pink wines coming in now.

Next is a Txomin Etxaniz Rosé from Basque country. These grapes grow 7 feet high off the ground. The soil there is white, and it captures so much sunlight that it radiates heat off the ground, so the grapes have to be away from the heat of the soil.

Until they had cold fermentation in steel tanks, these wines were not very good, but when they could invest in stainless steel tanks, the wine production improved a lot. “Zomin Zaniz” is the pronunciation according to Harry Duke.

The last Rosé tasted today is a 2021 Les Rocailles from Savoie (aka Savoy, southeastern France). It is a cool growing area, light body, heavy acid, a good level of fruit, built on its tannins. It is like a red wine variant.