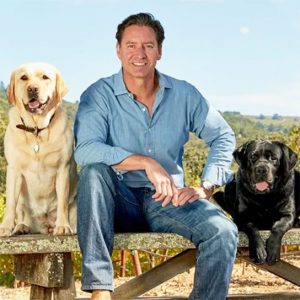 Cameron Hughes joins Steve Jaxon and Dan Berger on California Wine Country today. He is a wine merchant, following more or less the business model of a négociant in France. He buys bulk wine for a low price and sells it to retail customers through De Négoce, his label and sales company. (The company name is French for “of the trade.”)

California produces so much good wine that not all of it finds a buyer. Dan Berger agrees the wine is really high quality wine that simply doesn’t have a home. Cameron Hughes has been doing this for about 20 years. He built a concept called the “lot concept.” He sold that company in 2017.  Cinergi was his previous brand. Then in 2019 someone offered him 100,000 gallons of 2018 Cabernet Sauvignon at a really good price and he felt he had to get back into the business. He finds wines that he can sell for 80% below their normal retail price.

En Primeur is the French name of the early buying period in French wineries. (This is also done in Italy, la vendemmia. -ed.) Dan Berger says the difference is that Cameron Hughes has a fabulous palette so customers can trust his choices will turn out well.

Mondavi used to have the slogan, “We’ll sell no wine before its time,” spoken by the great Orson Welles. Cameron Hughes has reversed that and says, “We’ll sell a big chunk of the wine before its time, because it’s what I do.” They did over 90,000 cases of wine in the last year. The website store has launched. Last year, the wine wasn’t even bottled. The earlier you buy in the cycle, the lower the price. They are tasting a Viognier that would sell for about $25 and Cameron Hughes sells it for $8. Since these wines are so young, consumers should cellar them for a while. Cameron agrees and says the need to keep them for a while is the tradeoff for getting a $25 bottle for $8.

Cameron Hughes grew up in Modesto, California and went to high school “with the Gallo kids” and his dad worked for Gallo then for The Wine Group. His first job was to collect and dump old out-of-code wine. He got a sales job in the wine business where he could build up his personal cellar. There used to be a 40% discount given among people in the wine trade, but that’s no longer done. Then he put a brand together and made a sale to Costco that started Cameron Hughes Lot 1. He sold that company and went into the high-end steak business, but was tempted by the wine business again and now has also started De Négoce.

They taste a Chardonnay that Dan Berger says, “…leans in the direction of Chablis” so if you don’t like fancy oak Chardonnay, this will be your taste. It will age for 10-12 years. Now they taste a different Chardonnay, in a different style. It’s a richer, more opulent style. It is 14.2% alcohol, from Russian River Valley. It retails for $95, from a world-famous winemaker. But De Négoce is able to sell it for $20. Dan Berger says that is outrageous. There is a character in the fruit, it is less tropical and more citrus. It leans to a lime-flavor and fresh grapefruit component. There is another Chardonnay to taste. It comes from high up the Mayacamas Mountains, in Sonoma County, about 2000 feet of elevation. Part of the De Négoce business is that Cameron Hughes can not disclose exactly where the wine came from or who made it.

Next is a Sonoma Mountain Cabernet, made by a husband-and-wife team. The vineyard is called Pickberry Vineyard on Sonoma Mountain. It is very young and needs time in the bottle. Dan says it’s hard to tell how long to keep it because it is so young you still get primary fermentation characteristics in it. He would put it away for at least a year. Cameron and Dan agree that the 2018 Vintage of Napa Cabs is a great year.

Next they taste a Spring Mountain Cabernet. It sells for $29 at De Négoce and its normal retail is over $100. Dan Berger thinks he knows exactly who made the wine. It is too young to develop the Cabernet character yet, but it is showing old-world styling. Dan Berger says that the tannins are strong but if you decant it for about 2 hours, that will knock out 90% of the tannins.