Bob Cabral joins Steve Jaxon and co-host Dan Berger, along with Tom Simoneau and Barry Herbst, for today’s California Wine Country, including a toast to the first day of summer. Bob Cabral is currently winemaker at Three Sticks Winery but is here to taste and talk about the three wines that comprise the launch of his own new winery, Bob Cabral Wines.

Tom Simoneau introduces Bob Cabral who is is introducing his first ever line of wines. Tom says these wines are spectacular. All the wines have proprietary names because none of them have a single vineyard. They are:
• 2015 Troubadour Russian River Valley Pinot Noir,
• 2015 Cuvée Anne Rose Sonoma Coast Chardonnay,
• 2016 American Girl Russian River Valley Rosé of Pinot Noir. 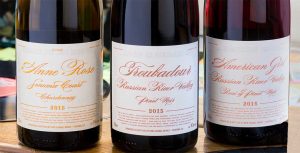 He sells wine to musicians and bands such as Sammy Hagar. Les Claypool, the bassist of Primus, was on California Wine Country last year. He produces Pinot Noir on his own property.

Barry Herbst adds that Bottle Barn will do a Pinot Noir tasting in the store in August. Sign up for their mailing list to get in on the tastings.