Robert Larsen and Josh Silvers are today’s guests. Robert Larsen is back to talk about the wines of The Larsen Projekt and his other work in the wine business.

Also with us is Josh Silvers, super chef, owner and chef at Jackson’s Bar and Oven. 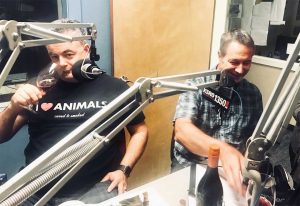 Josh Silvers and Robert Larsen live in the studio on CWC.

Steve mentions that the Larsen Projekt is spelled with a K and Robert tells how his wife designed the package and came up with the name. They found that there was a woman in the northeast who had a company called the Larsen Project with a C. So he decided to use the Danish spelling with a K, which is fine since he’s Danish.

Robert had worked for several wineries in PR and marketing and he left Rodney Strong in 2015. He now represents wineries in their public relations and media relations. He also runs The Larsen Projekt as a bottler of blended wines that are grown around Sonoma County.

Robert tells how one reason why he left Rodney Strong was because he wanted to start his own wine brand. He thought he could start small and keep it simple. Since he knows a lot of people, he could get small amounts “topping wine” from his frienids. They offered him various wines and he came together with a nice blend of Red Grenache and others.

Right now it’s harvest time so he is out harvesting himself, with Mike Saini of Saini vineyard.

Steve asks Josh if chefs would share, for example, meat, if one needed some that another had. Josh says that it’s true, their friends in the business in the communities of Sonoma County are very generous with each other.

Steve and Josh talk about the rebanning of Goose and Duck Liver in California, which is a great disappointment to them. 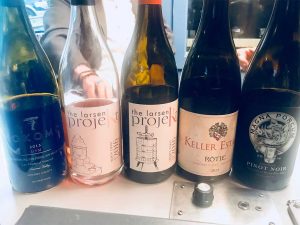 Steve asks Dan to tell about Robert as a PR man in the wine business. Dan says that Robert brings credibility. His job is to take the wine makers’ stories and he can find a story and turn it into a real story. Several NY and Chicago PR firms appear working with wine, but they don’t know wine and don’t do such a good job. They are hired for their reputation, which is not so deserved. Robert knows wine. His office has the smell of wine.

Steve asks Robert to tell about the wines from the Larsen Projekt. Robert says that at first, he was barrel tasting. He identified the Rosés that he liked and with a handshake they started that. He got less than a ton from Peter Mathis, of Grenache. He didn’t have enough for a full ton from the ’16 harvest. Dan explains how Robert works, getting small amounts of wine from different high quality sources. He drives to the various properties to taste on site. He has chosen really good winemakers to work with. He gets access to small amounts of wine from various sources, to make blends.

Steve asks Dan about custom crush. Dan says he was at Pappa Pietro Pieri. They are lending out part of their winery not as a negociant or custom crush, but because their neighbor needs some storage. When you need something you get it, and vice versa. He can use his neighbor’s bottling line. Robert says it’s a characteristic of the community they live in and he appreciates it. Josh agrees that the small community feeling makes living in Sonoma County special.

Next they taste a North Coast Grenache Rosé. It was a deliberate, carefully made Rosé. It’s a 14.1% alcohol, delicate with good acidity and nice aromatics. Other processes may have higher alcohol. They make Rosés from Pinot Noir in Sonoma County because they have a lot of Pinot Noir, but Grenache is a good grape for Rosé. Dan, naturally, says that it will be evern better with a year in the cellar. Josh would eat a big raw shellfish platter with this wine.

Josh remembers a tasting with several winemakers and another chef, of Russian River Valley Pinot Noirs, and his and the other chef’s choices were the opposite of the wine makers’ choices. That is because the winemakers are critiquing the wine while he and the other chef were looking for wines to combine with food, so they were judging on completely different criteria.

Robert has brought a fantastic Pinot Noir from his friends. Dan says it’s a 2014 Pinot Noir that comes from Green Valley, a cooler segment of Russian River Valley. It has beautiful aromatics like plump ripe black cherry and a little cranberry. He thinks it needs about 2 years in the bottle. You could decant it for a couple of hours to get something more from it. It could go with grilled King salmon, because it would go well with the oily texture of the fish. Candied violet, says Josh. It’s called Magna Porcum and he thinks pork and Pinot Noir is a good pairing.

GSM is a blend Grenache, Syrah and Mourvedre. It’s common now, and 15 years ago we saw it coming from Australia. It has a pomegranite and cranberry aromatics and wild raspberries from the Grenache. It’s a 2013 and Dan says it needs decanting or a little time in the bottle. Josh thinks it would go well with lamb.

Friend of the show Blair Hardman writes in to say, “Get me a bottle of the Kokomo.”

Next tasting is the 2013 Sonoma Coast Keller Estate Rotie Syrah that has been co-fermented with a white wine grape called Viognier.

Robert tells about where he gets his grapes for this blend. It’s cool climate Syrah grown in the Petaluma Gap. It’s a great location for Grenache. Dan tells about the Keller estate. The region is cooler and the grapes can be challenging. Josh thinks it would go with duck. Dan’s columns next week will be about Petite Syrah.

Next up is the Larsen Projekt 2016 Grenache, North Coast, Redwood Valley. The Syrah comes from the Petaluma Gap, and a little bit from Sonoma Valley and some from Dry Creek Valley. Dan says it’s halfway between a Beaujolais and a Rhône.