Without their expected guest today, Steve Jaxon, Dan Berger and Barry Herbst taste and discuss Chardonnay and Burgundy, and also discuss the value of acidity in wine and how the wine market changes from year to year especially when a great vintage like 2015 is about to hit the stores.

The CEO of Kendall-Jackson, Rick Tigner, was supposed to be coming in to explain the Wine Country Tour de Fox Ride, on Saturday, August 26, a bike ride to raise funds to fight Parkinson’s disease. There will be lots of food and wine and they aim to raise $500K this year. There will be bike rides of all distances, for riders of any and all abilities.

First they taste a 2016 Freemark Abbey Cardonnay from Coombsville, on the eastern side of Napa, a very cool region that produces high acid Chard grapes. Dan calls it one of the best non-Malolactic acid Chards around. Citrusy, lemon curd, oak notes. Dan thinks it will expand in 5 years but needs cellar time to expand its aroma. Right now it’s all fruit. Barry reminds us that there are Napa Chards that bear 20 years of cellaring.

The opposite side of the coin is the next wine, a Chardonnay from Qupe Vineyards in Santa Barbara, whose winemaker will be in next week. It is done with Malolactic fermentation, 100% barrell fermented, lots of oak. Qupe is a Chumash word for a California Poppy. This is a “big chewy” wine that could even go with light roast beef dishes. It has some power but also good acidity. 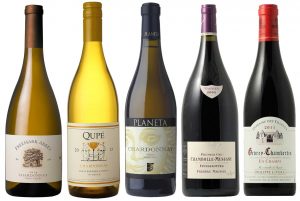 The next tasting is a Sicilian Planeta Chardonnay, from Planeta, an innovative winery that planted some grapes that weren’t local. Visit their website here: http://planeta.it/en/

Barry says it’s a rich style, butterscotch flavors, challenging aromatics, perhaps aged in walnut and oak. Barry says he has seen walunt and cherry wood used in barrels in Italy. It’s unusual and not like the California style. Dan says this kind of wine requires small crops, so it is an expensive wine to make. It sells for $32.50 at Bottle Barn.

Dan says, “We have started to make Chardonnay in California slightly differently over the last few years. We’ve had really good vintages from 2010, 11, 12, 13, a number of good vintages for acid, especially 10 and 11.” The more acidic style of Chard is selling well, too.

Steve invites Dan to explain acidity. Commonly, that could be a negative, but Dan explains they are made to go with food. These wines are aimed for food, and without the acidity, they won’t go with food. If it’s too soft, it won’t go with food. We need saliva to appreciate the food, and higher acidity produces that. Barry also says it keeps the wine lively and fresh tasting. The really ripe over-the-top creamy Chards would get cloying and clumsy and not age very well. Since 2010, that has changed.

Again Steve mentions that the CEO of Kendall-Jackson, Rick Tigner, was supposed to be coming in to talk about the Wine Country Tour de Fox Ride, on Saturday, August 26, a bike ride to raise funds to fight Parkinson’s disease. Dan says that KJ has been dedicated to making quality wine with a purpose, which can be enjoyed with food, and they also do a lot of charity work in Sonoma County.

The day of Chardonnay and Burgundy now switches to France, as next they open the first of two Burgundy wines. The Vintage of the Century is 2015, and is now coming in, so vintners are trying to sell off the 2014s. This is a 2014 Chambolle-Musigny from Frederic Musigny. It is a Pinot Noir that Dan says is a great example of a wine you can cellar for 15-20 years before you ever drink it.

Dan says it is just a shadow of what it will be. Barry says it will be $45 a bottle, which is half the MSRP. Dan says you never get Burgundy of this quality for that price. It has plenty of acid to go the distance, at least 10 years in the bottle. Dan would decant it for a few hours before serving.

The next wine is from further north in Burgundy (or Borgogne, in French), which is a stunning landscape. This wine is a 2014 Gevrey-Chambertin from Philippe Livera.

Both of these Burgundy wines will be in Bottle Barn soon. Dan prefers the Gevrey-Chambertin.

Barry explains that the 2015s will have high scores and the 2014 are selling now for bargain prices.

Dan says that for a retailer, stocking a wine like this is a risk. Steve asks Barry to explain how Bottle Barn can get two bottles of $90 wine that sells for half that amount. Barry gives credit to his consumer base, which in comprised of winery owners, winemakers and other people who know wine. They buy across the board, and Bottle Barn knows that they can stock it and move it. Dan adds that Bottle Barn is known by the producers for being willing and able to stock great deals like these.

You have to be able to navigate the wines, the producers and the vineyards, and when everything comes together, that is where you find your bargains.

Dan and Barry have known each other since about 1980, when they both lived in Los Angeles. They would see each other at tastings while Barry worked for great restaurants and Dan wrote for the LA Times.

The last wine is Wind Gap from Pax Mahle. Visit their website at https://paxwine.com/ for more information.  It has 12.5% alcohol, the color is pale but it is loaded with flavor. The winery is named after the Petaluma Wind Gap. It will sell in the low $20s.