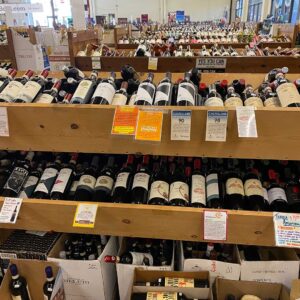 Bottle Barn wine buyer Barry Herbst joins Steve Jaxon and Dan Berger to taste and describe some recent competition winners available at Bottle Barn, which is the sponsor of this radio show and podcast.

Dan Berger has decades of experience as a wine judge and wine competition manager. This year’s competition season is full of important appointments. Speaking of competition and the upcoming Winter olympics, Dan Berger mentions Ice Wines, some of which are coming from New York and Michigan these days.

Barry begins with a Gruet sparkling wine. Dan Berger says that they have figured out how to get the grapes from the vineyard in northern New Mexico to the winery in southern New Mexico. It is an expensive process that has to be done carefully. Think-skinned varieties can go for days but thin-skinned grapes like Chardonnay and Pinot Noir have only a few hours before they wilt. This sells for $13.49 per bottle. Barry Herbst has also brought a 2019 Chalk Hill Chardonnay, from the Sonoma Coast, a Double Gold medal winner at the SF Chronicle competition.

Chalk Hill has been known for consistent Chardonnay, Sauvignon Blanc and Cabernet Sauvignon. They are perennial winners in all the competitions and always reasonably priced. Dan Berger describes the Chalk Hill viticultural program led by Mark Lingenfelder who is very respected in the industry. These grapes show his quality, with lemon oil and ‘candle wax’ flavor. That is an unusual term but it seems to work, both as a descriptor and as a source of more jokes than you might have thought possible at first.

Next is a 2020 Mohua Sauvignon Blanc from Marlborough, New Zealand that won a Triple Gold at Dan Berger’s International Wine Competition. It’s $10.99 at Bottle Barn and that’s “… fabulous” says Dan. It’s a classic example of New Zealand style wine, with its green grass and lime flavors.

Then they sample a 2006 Gloria Ferrer Pinot Noir, a single vineyard designation from Sonoma Valley. This is Dan Berger’s cellar wine for today. All agree it is delicious.

Finally they taste a de Lorimier Primitivo that won various awards at Harvest Fair (Best of Class) and Double Gold at the Chronicle. It is part of the Wilsonn family portfolio. It is a warm wine that will go well with a winter stew.