Dan Berger and Barry Herbst join Steve Jaxon to talk about some of their personal favorite wines, on California Wine Country this week. (This show is slightly abbreviated due to time constraints from a Golden State Warriors’ NBA basketball game being broadcast live on KSRO this afternoon.)

Recap of this week’s wines tasted:

Dan Berger brought a bottle of champagne and a nice Chardonnay from Black Kite Cellars. Dan notes that Petaluma Gap has just been approved as an AVA, American Viticultural Area. The Petaluma Gap is a cut in the hills and the wind from the Pacific Ocean runs through this gap and up the sides of Sonoma Mountain. Dan says, “On the Petaluma side of Sonoma Mountain, you get these heavy winds, which shut the vine down a little bit and forces them to have a longer growing season which means that you retain good acidity and you have wonderful flavor.” Barry says it’s the first AVA to be set up by a weather factor, not by soil.

They taste a 2015 Chardonnay from Black Kite Cellars. It has a citrusy floral character.They bought the fruit from Gap’s Crown vineyard. The purchase of this vineyard was important for the approval of that new AVA, according to Barry Herbst. Bill Price, who bought it, is a partner in other wineries and his purchase caught people’s attention. Dan says he has hired great winemakers and this wine is a good example of his great work. Steve says he really likes it, as a Chardonnay fan. Dan says you don’t taste acidity, you taste the balance. It’s got some richness to it. Barry notes that Black Kite sells well at Bottle Barn. 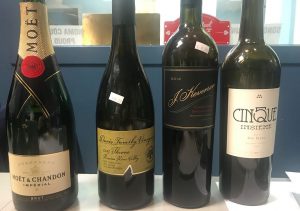 Steve asks Dan to talk about acidity in wine, for the benefit of listeners who may not know. Dan says that a great wine has good acidity, but a really great wine doesn’t show acid, it doesn’t taste like a lemon. He says the balance and structure are what make it work well with food. “The succulence factor comes in from the grapes being left on the vine a little extra time, to pick up a little more tropical fruit component. The wine actually has 14.8% alcohol but you don’t taste that, it just gives richness, mouth feel, a body.” Steve asks, why do we want acid in wine? Dan says, tomatoes have acid. Any fruit has to have a balance of acidity. For example, sweet apples with no acidity are not interesting. That’s why they use Granny Smith apples in pies, so you can balance their acidity with sugar.

This wine was aged in oak, so you have some of the caramelized flavor to it. What Dan likes is, he would age this wine for 3-5 more years. The richness that will come out of it is based on the acidity which won’t go away.

Barry brought three reds, including a couple of “value plays” and a Rhone blend wine from the Davis family. But first, they open a Moet & Chandon Champagne, Brut Imperiale. It is one of the more popular ones and sells in the high $30s. Dan says Dom Perignon is a whole different game, it is aged in a more precise manner. Barry notes it’s made by the same people. But Dom P. sells for $160 and Barry notes that surprisingly, the quality is very high. Dan also mentions Crystal, a very special cuvée with unique packaging, a clear bottle with a sunscreen plastic over it. The going price is $250.

Dan also explains why we have to call Champagne “sparkling wine.” It’s a long story but there was an international treaty in 1922, which said that Champagne was protected for all time. Since it was during Prohibition, we in the US were not even in the wine business. So some American producers, like Korbel, were “grandfathered in” after the 1994 agreement that protected the Champagne name, because they were using the term long before the agreement.

Then they taste a 2012 J. Keverson Sonoma County Chalk Hill Cabernet Sauvignon, which sells for only $10 and is an amazing value. Dan says that what is nice about this bottle is that it has “future” written all over it. Dan would cellar it for at least 3 more years. Or he would put it in a decanter, to drink it today. Barry notes it has the elegance of a Pinot Noir, Steve says it does not “slap you in the face” like some Cabs do. 14.2% alcohol.

Next they open wine from Cinque Insieme, which is a red blend of Grenache, Syrah and Mourvedre, all fruit from Sonoma County. Dan says this is delicate and graceful. At $11, it’s also a steal. Dan says he’s tasted wines that cost four times as much, which don’t deliver the way this one does. He says it reminds him of Zinfandel. Barry says there could be some Zin in the blend. It has 14.4% alcohol.

Dan says a lot of inexpensive wine has over-ripe characteristics in the $5-6 wines.

Barry says that instead of decanting, it’s also possible to simply pour out half a glass and then shake the bottle, to get air on the wine. Dan says you can also just swirl wine in a large glass, to release the aromatics. Dan says air is good for new wine, not so much for older wine.

Dan promises that next week, they will talk about Zinfandel (and indeed they did)!