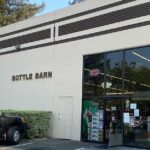 Jason Schneider and Lauren Patz join Steve Jaxon, Harry Duke and Dan Berger today on California Wine Country. Lauren Patz runs Redwood Empire Whiskey and Jason is the GM of Bottle Barn, where he is also in charge of the Spirits section. He wants the shop to have all the kinds of spirits that people want in addition to wine. They have also expanded the website, even if they can only ship spirits within the state of California.

Redwood Empire Whiskey is part of a larger company called Purple Brands. They make Raeburn Chardonnay and Scattered Peaks wines. The distillery was started in 2013 and whiskey started going into barrels in 2015. They started releasing in 2019.

For a whiskey to be labeled “Bottled in Bond” it has to come from a single distillery, a single distilling season, has to be at least 100 proof and be aged 4 years. It was the first consumer protection act in the US.

Dan Berger has brought a bottle of wine from his cellar, usually it’s a well-aged wine but this is a 2019 Kite Trail Chardonnay. Generous and soft with some Carneros characteristics. He also brought a 2016 Ricardo Santos Semillon from Argentina.

Wine Enthusiast magazine has named Bottle Barn one of the top wine retailers in the country. Dan Berger’s Wine of the Week in his weekly article in the Napa Register is usually one that is available at Bottle Barn.

Jason Schneider tells that Redwood Empire is the top selling local brand of whiskey, because of its high quality for its price. For a young distiller, the quality is very high already.

They taste a Redwood Empire Bourbon which they say has real personality, with a good finish. Even if this is wine country, and a wine show, Sonoma County has a lot of craft beer and spirits too. The local spirit industry has flourished along with winemaking and craft beer in successive waves of new distillers. Most of the distilleries in Sonoma County started with vodka and gin, in order to have product early on to sell, before the whiskey can come on line, due to the several years time required for the first bottling to be ready.

Then they taste their Bottled in Bond Rye Whiskey. It is a four-grain rye, but also some wheat, malted barley and 3% corn, which she says, you can’t taste it but you can feel it.