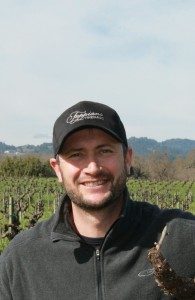 Nova Perrill is our guest today on California Wine Country with Steve Jaxon and Dan Berger. He is the winemaker at Foppiano Vineyards. (The owner and CEO of Foppiano Vineyards were on CWC last August, here is the podcast page of that episode.)

Nova Perrill tells how he took a Crop Science degree at Cal Poly San Luis Obispo then he got hired at Mount Eden, where he learned winemaking and viticulture and where he was as likely to be on a tractor as making wine. It was in the Santa Clara Valley. Dan says that Santa Clara Valley had some vineyards back then but today it is mostly homes.

Paul Masson played a critical role in California viticulture. For one thing, he hired Martin Ray. He was instrumental in label laws. We had adopted French names but they didn’t apply to us, as our appellations and micro-climates are different. He thought that they needed their own names. Dan Berger says the first wineries in Sonoma County were in the early 1970s. In the ‘90s when Nova got to Sonoma, they were still stuck on five varietals and since then a lot has happened.

Nova Perrill’s first vintage was 2004. He was part of a class of winemakers that were in the middle of the second Renaissance, as Dan described it. In the 80s and 90s, winemaking skills were rare and winemakers would find work as consultants in a lot of places. Nova describes the location of the vineyard, in Sonoma County. They are the oldest Sauvignon Blanc vines in Sonoma County. He has the option of finding fruit that favors each of the two main flavor profiles of SV, grassy or tropical flavors.

Foppiano Vineyards was founded in 1896 by Giovanni Foppiano. It’s one of Sonoma County’s longest continuously operating vineyards. Every winery is assigned a bonded winery number. They are bonded winery 312, the 312th one opened in California.

Next they taste a 2017 Chardonnay. It’s from the Russian River, right off the estate. He describes the location. They are planting Barbera there. This is the last vintage of Chardonnay from there. Dan finds lime flavors and traces of new oak in it. They only made 49 cases of it and it is available at the tasting room. Nova learned not to be afraid of barrel fermentation and ML, and not to overdo it; “balance is everything.”

They taste a Cabernet that Dan says this is more like the ones of the 1960s. It is a 1981 so will have some brown color, and more after an hour.

They have a new mural out in front, to commemorate the original storefront that they had there. There is an avocado tree that is famous throughout Sonoma County. It produces thousands of avocados. There is a 100-year-old barn and much more. They are open seven days a week and Nova describes it as a diamond in the rough. They don’t to a lot of advertising.