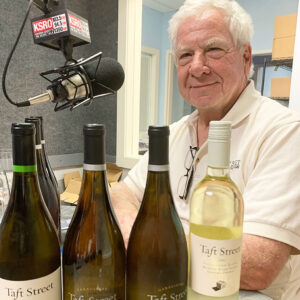 Taft Street Winery co-founder Mike Martini is our guest on California Wine Country with Steve Jaxon and Dan Berger today. Taft Street Wines is family owned and operated since 1979 including their time as home winemakers. They started officially as a bonded winery in 1982. Mike tells how his friends liked their wine so some of them decided to form a winery. They are bringing in grapes now on their forty-first harvest.

Today, instead of a cellar wine, Dan Berger has brought a new Rosé from Chile, called Maquis Rosé, a blend of Cabernet Franc and Malbec. White Zinfandel saved the Zinfandel crop, and so that was important for the business, but people are making true Rosés now.

Sauvignon Blanc is in heavy demand these days, it’s sold out everywhere. The second Taft Street Sauvignon Blanc is similar but it’s two steps forward, because it has a little more lees contact and some barrel aging, so it is more like a Chardonnay. Dan says that both would benefit from three to five years. He might age the steely one for seven or more years, for its aroma to develop.

2030 Barlow Lane in Sebastopol, north of Occidental Road, north of town. It is NOT in “The Barlow” which is a wonderful place with great businesses, but Taft Street Winery is “not at the Barlow!” for the record.

Next they taste the two Chardonnays. Again, there are two different styles. The first is a generic stainless steel style Chard with only a small percentage saw some wood. Mike thinks this is what Russian River Valley Chardonnay tastes like. It has acquired some fruit and spice but hardly any of the oak flavors. The second glass is richer and more full-bodied. It was fermented in French oak and has some malolactic fermentation.

Mike Martini readily admits that he is not the winemaker, and gives the credit to his winemaker Melissa Kuhn and consultants Jeff McBride and Guy Davis.