This episode of California Wine Country was originally recorded and published on Dec. 20, 2017. Carol Shelton was last on this show in February of this year.

There is no new episode recorded today, Nov. 6, 2019, as we recover from the aftermath of this year’s fires in Sonoma County. Please consider making a donation to the Red Cross, which has done so much for Sonoma County again this year to help the community in its time of greatest need. 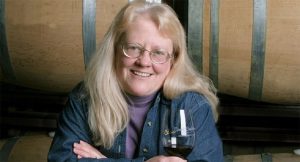 They taste her Wild Thing 2016 Chardonnay from a vineyard that they own. It’s all barrel fermented, no malolactic fermentation. Steve says it is adorable, Dan says it is a very succulent wine and is ready to drink now. It has a little tropical fruit flavor and has a rich mid-palette without any oak character. Carol says they stir the barrels every Wednesday for eight months. Dan says it’s so delicious and is ready to drink now, which is suggested by its screw cap.

The next wine tasted is called Coquille Blanc and is a blend of four varieties, mostly Grenache Blanc, and also Roussane, Viognier and Marsanne. Dan admires the complexity and subtlety of this wine and the different characteristics that come from the different grape varieties. Viognier gives you floral components. Grenache Blanc gives some chalky minerality, the Roussanne gives you peach and pear components, but Dan can’t figure out what is Marsanne’s best quality so he asks Carol. It has more peach flavors where the Roussanne has more almond. As this wine ages, they both will give a sweet honey flavor. Steve is surprised that he was thinking almonds just as she mentioned it. The Coquille is Carol’s favorite out of all the wines she makes. Dan says she is lucky because it is hard to get a good vineyard to grow all these grapes and she agrees that even if it is far away, it is worth it.

Dan Berger writes a weekly column in the Press Democrat (the local newspaper) and Steve asks him about this week’s column, which is about fads which come and go quickly versus trends which develop slowly. He mentions that Moscato was a fad for about a year. Today’s article is about trends that are on the upswing, trends that he noticed in 2017 and which will continue. First is the comeback of Merlot, but the biggest trend is that Rosé is coming on strong. Carol started making dry Rosé in 2002 and Dan says it is fabulous. She makes it from Carignane, which has vivid strawberry raspberry flavors. It is darker and not too thin, sugary or acidic, like some. This is crisp and soft and sweet.

Now they taste the Carignane, which has the weight. Carol Shelton says that you can tell Carignane from Zinfandel grapes when they are ripe in the vineyard because Zin crunches and Carignane disintegrates in your mouth, it is pulpy like watermelon. She treats it like a Zin and keeps it in American oak, which loves big fruity wines.

Dan notes that plenty of people are making vineyard-designated wines and that is better than blending wine from all over because the characteristics of that vineyard or “terroir” are what make it interesting. She is consciously trying to preserve the terroir of the vineyards. She does not want high alcohol or high sugar or too much oak. Dan says that high alcohol will cover the fruit flavors. Carol tells how she got some Chardonnay grapes that produced a wine that was 14.7% alcohol. After she removed some of the alcohol it got down to 13.3% and that allowed the fruit flavors to come through.