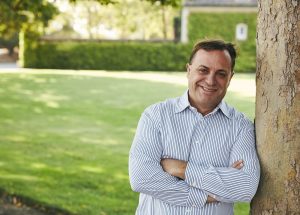 John Jordan, CEO of Jordan Winery, joins Steve Jaxon on California Wine Country, by telephone. Also calling in is Tom Simoneau. They will do a long distance tasting of a Jordan Chardonnay and a Cabernet Sauvignon, John Jordan also talks about his Sonoma Safe initiative, where he hopes to help conduct a safe reopening of Sonoma County hospitality businesses. Here is an article in the Press-Democrat about Jordan Winery’s plans for reopening.

John Jordan talks about plans for reopening that Jordan Winery has prepared, which include organized hikes around its beautiful property followed by outdoor lunches. He mentions the importance of the hospitality industry in Sonoma County and that “…the best part of Sonoma County is being outside.”

They aren’t allowed to provide table service yet, so instead, along with admission to a four-mile hike, visitors get a picnic basket with a bottle of Chardonnay and one of Cabernet, and some tasty morsels, to be enjoyed in the great outdoors. You need to visit the Jordan Winery website to make reservations. All of their visits to their Alexander Valley location are by appointment only.

John Jordan has sent two bottles to both Steve Jaxon and Tom Simoneau, so they will all taste the same wines from their respective locations. The first is a 2018 Jordan Russian River Valley Chardonnay. Tom says that this Chardonnay reminds him of when Jordan decided to favor the leaner style of Chardonnay. It reminds Tom of the French style, only 12% malolactic fermentation and 46% fermented in stainless tanks. John Jordan says that this is a surprising wine. The technique brings out the crispness and minerality, which is not the typical California style.

This is the time of year when they release their wines, so that 2018 Chardonnay and the 2016 Cabernet, which they will now taste, are showing up in restaurants now.

The 2016 Alexander Valley Cabernet also reflects Jordan’s French origins. Their style of Cabernet lets the terroir do the talking. They never chased the trend of the 1990s and early 2000s of making thick jammy wines. He never felt it went with food well. His Cabernet has lower alcohol, so it’s more like a Bordeaux than Napa style. Tom Simoneau notes that the alcohol is only 13.8 or 13.9%. In the true French tradition, the varietals are actually blended, with 80% Cabernet Sauvignon, 11% Merlot, 7% Petit Verdot and 2% Malbec. So, you could call it a Meritage, where each varietal brings its own characteristics to the blend. Tom suggests this is a good bottle to save for a kid’s 21st birthday.

John Jordan has written an op-ed for the Close to Home section of the Press-Democrat to describe Sonoma Safe. This requires community involvement and people should avoid “one size fits all” solutions. Instead, he encourages people to take control of their situation and figure out how to operate safely. That means being creative and clever. The website has ways to share ideas and foster cooperation between businesses and government. Tom Simoneau points out that John Jordan also has the John Jordan Foundation which made a contribution to Sonoma Family Meal. This organization pays restaurants to provide meals for hungry people, so that helps keep some restaurant employees in place, as well as keeping the supply chain going while feeding people, so it works on three levels.

Jordan Winery is located at 1474 Alexander Valley Road, which is also Hwy 128, about a couple miles east of Healdsburg Ave. Remember, reservations are required.