The first wine of the show this week is a 2011 Sauvignon Blanc from Quivira Wine in Dry Creek Valley, from Dan Berger’s person cellar. It is spectacular. 2011 was a cold year and the wine has had perfect storage in Dan’s cellar. Lemongrass, a trace of olive and under-ripe kiwi. “This wine’s got everything going for it,” says Dan. 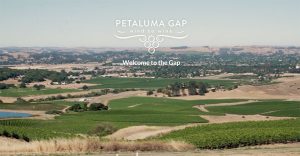 In Dan Berger’s opinion, the Petaluma Gap is destined to produce great Chardonnay and Pinot Noir. The Chardonnays that he is seeing is already displaying aromatics that are identifiable.

The Petaluma Gap AVA is three years old. The wind is what defines it. The mountains run east-west and the wind comes in from the ocean and extends the growing season, so the fruit is hanging longer but it maintains acidity because of the early morning fog that comes in. The Chardonnays tend to be difficult to make in large quantities. They taste a 2018 Chardonnay from Gust wines.

Gust was born in 2017. Megan and his sister are part of the second generation of Cline Family Cellars, which is known for big reds like Zinfandel but they were also always drawn to the cooler climate wines. She is lucky because her father planted in Petaluma Gap in the mid-1990s. It is all organically farmed. They saw the potential to focus on the best blocks and the best rows in the vineyards, to really show off the Petaluma Gap. Tom Gendall is their winemaker. Dan likes that this Chardonnay is subtle and not ostentatious. It has creamy richness but it is understated. This Chardonnay comes from two of their vineyards, Catapult and Diamond Pile, two sites that are one closer to the coast and one more inland. The winds swirl here, which means that the wind hits both sides of the leaves, which in turn imparts more of this AVA’s wind driven character.

Cody Rasmussen explains that Desire Lines makes wine from different vineyards. Griffin’s Lair in Petaluma Gap was one of the first vineyards they worked with. Cody explains the way the vines react to the wind. They will stop transpiration, they stop photosynthetic ripening in response to the wind, which slows things down, keeps the acid and gives you small canopies and small berries.

Cline has been around since 1982, they moved to Sonoma in 1989. Megan has been working with her family winery for 6 years. They grow a little Sangiovese for Jacuzzi family vineyard, a little Pinot Gris and some Viognier. They love their Rhone varieties. They also make olive oil.

Gust Wines and Desire Lines wines are both available at Bottle Barn, as well as the Cline wines, of course. Bottle Barn is open again for in-store shopping, from 10am-6pm. Bottle Barn can ship wine to most states.

In the mid-1990s, the Petaluma Gap was considered too cold for vines, but Fred Cline had had success in the colder Carneros area, and so he planted several varieties in Petaluma Gap.

Gust Wines does not have a tasting room yet, but one is in the works. She suggests people follow Petaluma Gap on Instagram, for news and promotional events.

They taste a 2018 Gust Wines Syrah, which Dan Berger says is almost feral, or wild, in a very positive way. Megan tastes wild herbs. Dan compares it to walking in a forest after rainfall. These Syrah grapes are some of the last grapes that they pick. It takes more time to ripen. Dan says that the winemaker has to be extremely careful that it does not get too much or too little air.

There is also some Cabernet Sauvignon in Petaluma Gap. That usually needs a warmer climate. This fruit comes from a moutain site in the Petaluma Gap. It’s above the marine layer so it gets time to ripen in the mornings. They are tasting a 2019 cabernet. Dan says the aromatics remind him of 1970s and ‘80s Napa Valley Cab flavors. It’s very exotic and too young to drink right now. It’s leafy and red-fruited, says Cody. The tannins are soft, says Barry.