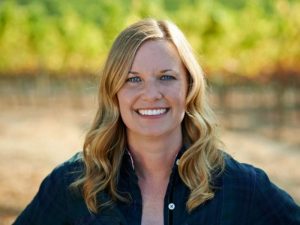 Karissa Kruse, who closes the show by wishing, “Happy harvest, everyone!”

Also in the studio today are Karissa Kruse, President of the Sonoma County Grape Growers and Erik Miller from Kokomo Winery

First, they open a Kokomo Winery 2013 Blanc de Blancs, a sparkling wine. Dan explains that this is a good example of successful “dosage” meaning how a sparkling wine producer will add sugar to control the naturally high acidity of sparkling wines. Dosage trials can be tricky because you can’t taste the results until at least six months later.

They introduce Najine Shariat of Goguette Bread who tells about her bakery that makes traditional levain-based bread, which goes really well with fine wine.

Steve asks Najine to explain about gluten, which is a protein present in wheat that some people are allergic to. Dan says that some large corporate bakers do not leave the dough to “proof” long enough, so they may be called sourdough but they lose the flavor of sourdough. Dan notes that their breads don’t say “sourdough” but they are. Najine explains that their levain is more than 20 years old and comes from Europe. Dan thinks the secret to these breads is that they taste and smell as good as the bread in France.

Next they taste a 2014 Gewürztraminer-Schönburger from Gehringer Wines in Canada. The Gehringers are two brothers from around Vancouver, BC, Canada who both studied wine making in Germany and founded their estate winery in Canada.

This wine is mostly Gewürztraminer with a little bit of Schönburger grapes in it. It’s slightly sweet and a real crowd-pleasing popular wine. Karissa agrees that the kiss of sweetness would make it go well with Asian food. She also wants to try it with the bread! Erik says that wine is like music for him, and different genres are pleasant at different times. It could maybe use a bit more acid but that’s the way it is and it’s pleasant in and of itself.

They are tasting the Pain de Campagne and everyone is impressed with it. It is made with some whole wheat flour. Dan says that it is so good you could use it to make La Panzanella (“la pahnt-za-NELL-a”) which is a southern Italian salad with fresh tomatoes, basil, other fresh ingredients, and pieces of day-old bread, which soak up the dressing made with vinegar and good olive oil. 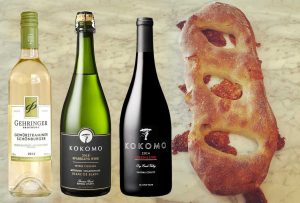 Today’s wines tasted and one of the breads, the Cheese Fougasse.

Next they are tasting the Goguette Bread Cheese Fougasse, which is delicious. Dan thinks it would make great savory French toast.

Erik also brought his Kokomo Dry Creek Valley Grenache. Dan says it’s killer, a phenomenal wine, and that it was harvested, appropriately, for flavor and not for color. Even if Dry Creek Valley is known for Zinfandel, he likes that he’s also making great Grenache. He explains how it is different than adjacent areas and makes it a bit like Cotes du Rhone. Dan thinks that Grenache has a great future in California. Erik says that the key to Grenache is that is has to have some age on it, since the vines are young. Dan tastes pomegranite and cranberry aroma, a very silky almost Pinot-Noir-like structure in terms of tannin, but the acid is a sleeper, there’s good acidity but it doesn’t show as acid, it shows as structure. Karissa mentions that Sonoma County produces a wide variety of types of Rhone valley grapes, apart from the better known ones. 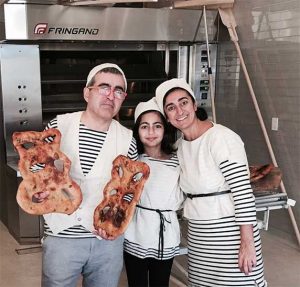 Najine talks about the baking schedule and how they have some breads for every day and others that are featured in rotation, not every day. Steve and Karissa ask how Najine and her husband started the bakery. They were both born in Tehran and raised in Europe. Her husband, who bakes the bread is also an electrical engineer and they moved to California 20 years ago to join the tech industry. She noticed that the restaurants here all close early. (In many parts of Europe, you can go out at 10 pm for dinner, here places are closed by then.) Her husband Nas Salamati went to France to be trained as a baker. They have been open since last January.

Steve is so impressed and so busy enjoying the bread and wine that the others join in to interpret his thoughts as words, for him. It was a highlight moment.

In France, a Boulangerie makes bread and a Patisserie makes pastries including croissants. These two have been blended together in many places, but they are truly a Boulangerie, which is just a bread baker. Her husband brought a big masonry oven from France and they keep it busy full time. Today they sent their first order by mail.

Steve asks what the name Goguette Bread means and Najine says a “goguette” was a singing society in late 1800s early 1900s in Paris and Belgium. She says that somebody told them it sounded like “Go get bread” so Steve asks Mike to Google “go get bread” to see if it works, and it does!

Dan tells what he finds charming about Goguette Bread, which is this: there has been a lot of consolidation and homogenization has taken place in the retail food trade, and that has not always been beneficial to those of us who care about high quality products. It’s hard to explain over the radio how good this bread is. You can’t just say this is good bread, but you have to go get one. Karissa says, “We devoured this bread!.”

Saturday is a busy day. They make Chocolate bread and the Miche, which is 1.5 Kilos (or more then 3 pounds) with a little rye. It lasts four or five days. “These breads, they are live organisms, and you can keep them in a linen bag for that long,” says Najine.